A clear bag policy is in effect for all events at Ladd-Peebles Sports and Entertainment Complex. Only clear tote bags smaller than 12″ X 6″ X 12″, one gallon plastic freezer bags or small handheld clutch purses–no larger than 4.5″ X 6.5″ will be allowed. Prohibited bags include, but are not limited to purses, backpacks, diaper bags, binocular cases, camera cases, fanny packs, luggage, any bag larger than the permissible size, and any bag that is not clear. Guests with necessary medical items or equipment will be allowed to enter the stadium with proper inspection. The following items are not allowed in the stadium: weapons (regardless of permit), umbrellas, cans, glass bottles, thermoses, alcoholic beverages, illegal substances, food, water/beverage, hard-sided coolers, brooms, poles, sticks, use of laser pointers, noisemakers, musical instruments, whistles, air horns, boom boxes, fireworks/firecrackers, pets (except for service animals or during specific promotions), professional photographic tools or equipment, tripods, monopods, and lenses longer than six inches, drones, unmanned aircraft devices, clothing or material with profane language or obscene graphics, laptop computers, promotional materials not approved by the stadium, strollers, and any other item deemed dangerous or inappropriate. You may bring approved personal items in a clear plastic bag no larger than 12″ X 6″ X 12,” including cameras, cell phones, folding stadium seats and seat cushions.

Golf Carts, UTV’s, ATV’s, and motorcycles are prohibited by the Ladd-Peebles General Manager (unless specifically approved) and may not enter or operate in the parking lot during events. Also prohibited in the parking lot are skateboards, inline skates, rollerblades, bicycles, scooters, mopeds, go karts and similar devices.

Stadium Re-Entry: no pass-outs will be given, police officers cannot give pass-outs. If you leave the stadium, you must purchase another ticket to re-enter. If tickets are not available, you will not be allowed to re-enter.

Lost and Found: found items during the game should be taken to the stadium office located on the ground level on the West side. Lost items may be reclaimed at the stadium office during regular business hours. The phone number is 251-208-2500.

No smoking: as per the City of Mobile statute. This covers the facility and grounds.

Guests Conduct: guests’ experience must not be disrupted by unruly actions. Please report any inappropriate behavior to the nearest usher, security guard or facility operations staff member; no foul or abusive language or obscene gestures are allowed, intoxicated guests will be denied entry or will be subject to ejection; guests must not go onto the field, throw objects onto the field or interfere with play. Violations will result in immediate ejection and/or arrest and prosecution. Guests will sit only in their ticketed seats and show their tickets when requested. Guests wearing obscene or indecent clothing will not be admitted. Guests will comply with requests from staff regarding facility operations and emergency response procedures.

High School Football Games: New safety measures have been established by MCPSS Superintendent Chresal Threadgill. The number of police/security officers will be increased at all MCPSS home football games and other sporting events. Schools will only have one or two designated gates for spectators to enter, walk-through metal detectors will be utilized at these entrances, which will be manned by armed police officers as well as a school administrator or a designated school official. Metal detector wands will also be used at gates as an additional security measure. No one will be allowed into any game without going through the proper security checks. A uniformed officer will be at both gates, the home and visitor gates, for the duration of the game—until the game has ended and the stadium is cleared.) All security should be positioned through the stadium and on patrol. There will be absolutely no passes out; everyone entering the game must buy a ticket regardless of the amount of time remaining in the game. Any suspicious attire may warrant an additional search of individual(s). MCPSS reserves the right to deny entry and/or remove anyone from the stated sporting venues. Only clear bags, including purses, will be allowed inside any MCPSS sporting event; all bags will be searched upon entry. Backpacks and umbrellas will not be allowed in the stadiums (no exceptions). There will be extensive parking lot patrol, corridor patrol, and frequent restroom area monitoring at all games. Officers and administrators will constantly monitor stands on both sides. No spectators will be allowed to change sides for any reason; officers will monitor end zones during the games. A team will conduct a thorough sweep of the interior and exterior perimeter of the stadium to ensure that a weapon is not placed inside the stadium or on the exterior perimeter between games. All MCPSS employees working games, including coaches, are required to wear official name badges in order to be easily identified as official personnel. Band chaperones must have formal credentials as well; t-shirts will not be considered official. Walkie talkies should be used by school administrators to allow constant communication throughout the game.

Information concerning parking may change according to events and restrictions mandated by coronavirus orders. Please check back here for your particular event as this page will update with new details. Parking and pricing is handled by the stadium on an event-by-event basis.

Currently, due to coronavirus restrictions, tailgating is not allowed in the lot prior to events. Please see specific event info for the time(s) that the lot will open to general public parking.

Tickets for most events at the stadium are sold by the events themselves, so please contact them directly. For high school football games, tickets are sold at the stadium on the day of the event only. For reserved tickets, please see the seating chart below for your seating location in the stadium.

Eleven luxury suites offer elegant surroundings to view all the field activities in a climate-controlled environment. The suites range in size from 15-34 seats with pricing adjusted based on the suite’s size. Individuals or companies interested in luxury seating for all Ladd-Peebles events should contact the stadium office at 251-208-2526.

The home side of the stadium is the West side where the press box is located.

Handicapped seating is located in the South end zone. Please enter through Gate 6W to access that section.

For ticket information, availability, and pricing for the stadium’s premier events, please contact those events directly.

We look forward to seeing you soon! 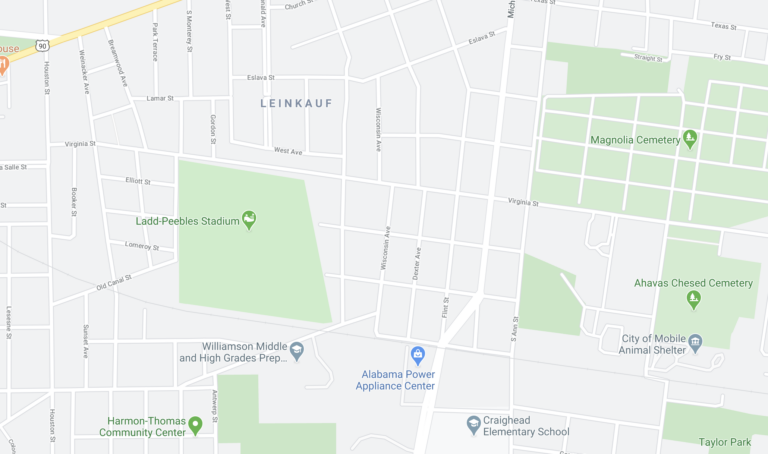 Ladd-Peebles is located near Downtown Mobile at 1621 Virginia Street.

Coming from the West:

Take I-65 South to I-10 East to the Michigan Avenue exit (exit 23) and go North about two miles. Cross the railroad tracks to the first light. Take a left on Virginia Street. The stadium will be down the street on the left.

Coming From the East:

Follow I-10 West through the Wallace Tunnel. The third exit is Virginia Street. Exit to the right and go straight approximately two miles. The stadium will be on the left.